A Guide to HDPE Pipes: Properties and Common Uses

A Guide to HDPE Pipes: Properties and Common Uses 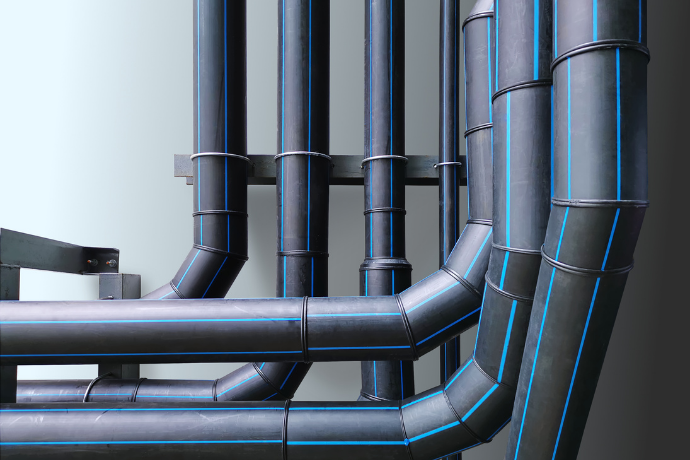 HDPE, an acronym you’ll commonly hear when shopping for plastic pipes, stands for high-density polyethylene. This type of plastic is one of the most commonly used in the world. It has a broad range of applications, including the manufacturing of pipes and fittings.

In the United Arab Emirates (UAE), pipes made from this material are in high demand, which is not surprising considering the amount of construction work in the country.

But what makes HDPE so popular?

This article will tell you all about HDPE pipes in the UAE, including their basic characteristics, primary uses, and how they differ from other plastic pipes.

As a plastic, HDPE is considered one of the most versatile polymers. Thanks to its unique characteristics, HDPE can be used for a wide range of purposes (more on this later).

For one, HDPE pipes are light, flexible, and easy to install, which helps reduce construction costs. The plastic itself is also easier to fabricate than other piping materials.

They are also durable and stress crack-resistant, not to mention corrosion-free.

HDPE’s mechanical properties include a high minimum yield strength. This dictates how well the pipe can withstand tension from water pressure inside the pipe.

In terms of chemical resistance, HDPE pipes have high tolerance to alcohols and diluted alkalis and acids. They are also 100 percent recyclable, which means they have minimal impact on the environment.

HDPE has natural moisture, weather, and heat resistance on top of its innate durability. Because of this, it has been used to manufacture many things, including bottles and other containers. This type of plastic is also the primary material choice for cutting boards, chemical tanks, and marine construction.

In terms of piping, HDPE can be applied in more than a few situations, including:

HDPE pipes are so durable that they can last 50 years in an agricultural setting. They are also light and easy to assemble, which explains why they have replaced metal pipes in this sector.

This and the polyethylene pipes’ corrosion resistance allow them to contribute to agriculture through the following applications:

Pipe systems made from high-density polyethylene make water transport easier. Besides being sturdy and pressure resistant, HDPE pipes also pass safety standards with their nontoxic nature and for being food grade. This explains why the same polymer material is used in containers to hold potable water.

3. Transport of edibles and chemicals

Polyethylene’s high corrosion and chemical resistance combined with its non-toxic characteristics also make it a viable choice for industrial applications, particularly those focused on the conveyance of milk, water, fruit pulp and juices, edible oils, acids, and alkalis.

HDPE pipes and fittings don’t easily corrode or get damaged from chemical exposure, making them excellent choices for the liquid waste and sewage disposal system. They can withstand corrosive chemicals, treated or untreated effluent, and even radioactive waste.

Among their residential, commercial, and industrial applications include:

HDPE pipes stand out in terms of wear and chemical resistance. They are also lightweight and leave less impact on the environment

All this makes HDPE the best pipe choice for submarine and underwater pipelines.

HDPE pipes and fittings are found in the following submarine or underwater applications:

6. Electrical and other non-liquid installations

Besides plumbing and other liquid-conveyance installations, HDPE piping can also be used as conduits for electrical cables, as well as:

How HDPE Pipes Differ from Other Plastic Pipes

Some would argue that HDPE is the best plastic pipe used today. But while it’s true that it has advantages in certain situations, it is not accurate to say that it’s the ultimate choice for all applications.

We’ve compared other plastics used for pipes with HDPE to help you make informed decisions on your projects.

PVC – or polyvinyl chloride – is another plastic that has been used to make pipes. Like HDPE, PVC pipes also offer durability and corrosion resistance, making them sustainable and cost-efficient.

However, experts agree that PVC pipes can be installed faster and easier.

Still, when it comes to weather resistance, HDPE reigns supreme. This is especially true when there’s rain, wind, stress, heat, or cold involved. While PVC pipes can withstand room temperature liquids, they don’t do well with temperatures above 140 degrees Fahrenheit.

HDPE also has less risk of leaks given its fused joints but needs specialized machinery to install, unlike PVC. This could contribute to the installation and maintenance costs of a construction project.

ABS – or acrylonitrile butadiene styrene – is one of the oldest plastic pipes still in use today. It’s quite affordable and considered a cost-effective option for residential and commercial plumbing. It may very well be cheaper than polyethylene pipes.

ABS pipes have their own strengths. They resist signs of wear and tear, including fading, rotting, peeling, and flaking. They also don’t leak unless punctured from the outside.

Compared to HDPE, ABS has a slightly higher density and impact strength. The difference between the two in terms of strength-to-weight axial points is more pronounced in favor of ABS.

But unlike HDPE and PVC, ABS piping is less versatile. It also doesn’t fare well under extremely low temperatures. It is limited to underground applications where it won’t be exposed to direct sunlight.

Cross-linked polyethylene plastic (PEX) pipes are used for high-temperature applications. They can withstand heat better than HDPE and are comparably superior in strength.

However, PEX requires more specialized fittings, while HDPE works with fused joints attached by a special type of machine. This means PEX could be more expensive in residential and commercial buildings.

The welded joints of HDPE also make it more viable for liquid distribution as it is much less prone to leaks and contamination than PEX.

HDPE pipes serve a wide variety of uses in different industries, making them popular among contractors. Use this article as a guide and take advantage of the benefits offered by HDPE pipes.